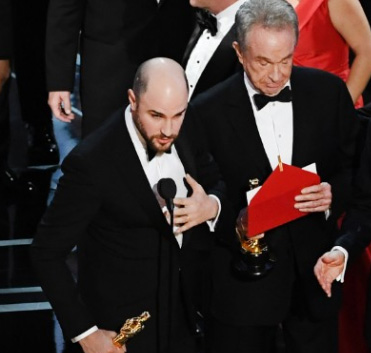 What I learned from Oscars 2017

Girl, I saw it.  In fact, I stayed up much later than I usually do to watch the 2017 Oscars.  I liked several of the movies nominated and wanted to see if they would win.

By now you know what happened was like nothing in Oscars’ 88-year history.  Warren Beatty entered the stage with that pretty dark red envelope in hand. Accompanied by the ravishing Faye Dunaway (can you believe how great she looks???) they smoothly announced the nominees  for “Best Picture”.

Suddenly, Beatty started making weird facial expressions.  It reminded me of the look I make when I’m trying to decide whether or not to take the last donut or bag of chips. The creepy grin plastered on his face seemed almost sneaky, and brought to mind  the Cheshire cat from “Alice and Wonderland”. Dunaway thought he was joking and said “you’re impossible”. He stood there looking constipated and confused, but still rather handsome in his tux.

I knew something was going on; I sat up in bed and turned up the volume.

Beatty did what seemed to be an attempt to simply show Dunaway the envelope. But, she blurted out “La La Land!” Wrong!

You know the story by now, so I won’t rehash it. If you don’t know what happened check out Cara Buckley and Brooks Barnes’ account called “What It Was Like Onstage During the Oscars 2017 Best Picture” featured on NY Times.Com. I think they captured it perfectly!

Let me tell you girlfriend to girlfriend, what stood out to me.  First, of all, some folks acted a little coo-coo through this entire thing.

For example, once he knew what had transpired, Jordan Horowitz (the producer of LaLa Land) instantly positioned himself as “stage boss” (not to be confused with “Cake Boss”)  and literally snatched the envelope from Beatty’s hand without thinking or acknowledging Beatty…as lucid or human.  That bugged me. No matter what’s going on, we must always be kind.  Was he just a mean-face or did he think Beatty was responsible for the error?

Either way, I thought his actions were rude. He could have shown more grace and respect for another artist, a “senior statesman” of sorts and a …PERSON! After all, Beatty was making great cinema when this joker was still in pull-ups. I hope he apologizes to Beatty.  Don’t get me wrong, Horowitz seems like a nice person who just behaved badly for a moment. What do you think?

Oscars’ Lesson 1: I hope I don’t behave rudely like the producer of LaLa Land and disrespect anyone. Meanness is never cute.

Now for Jimmy Kimmel:  he did an amazing job throughout the Oscars, but Kimmel got on my nerves when the whole thing was going down. His silly jokes were unnecessary and did nothing more than unveil his own nervousness and masked panic.
“Warren, what did you do?” he jokingly shouted.

I wished he hadn’t said that until he knew what had happened.  It seemed prematurely disparaging. Maybe, he was trying to be a comedic distraction although disruption was the last thing that stage needed at the moment. I also remember someone yelling out “they read the wrong name” as though the presenters were solely at fault. They should apologize publicly for that particular statement, in my opinion.

Oscars’ Lesson 2: Genuinely hope I can trust a process during a round time and not feel the need to distract or entertain. It’s often better to just be quiet.

Beatty is not getting off easy here. He could have alleviated some of this mayhem by just speaking up in the moment! Oh, what a difference a few minutes can make.

I wish he had said “Stop!  Something is wrong.  I have the wrong envelope” instead of being all mad hatter about it (I must have “Alice and Wonderland” on the mind). He should have been a stand-up guy we all could respect.  I’ll bet I know why he didn’t say anything.  Warren Beatty is strictly old Hollywood. In those days, that industry was full of master “cover uppers”.

What do you think? Could that be why he didn’t speak up in the actual moment?  In the end, Beatty handled it OK, I guess. I was glad he explained himself after it all went down.  It was too little too late. At that point, it just seemed so awkward.

Oscars’ Lesson 3: I really hope I don’t just stand there and grin when I know something is wrong. Hope I stand up and deal with the situation in the exact moment -cover ups never work.

Kudos to PricewaterhouseCoopers (PWC) for issuing a speedy explanation and a swift apology.  Also, more props to the headset guy running around the stage snatching envelopes.   I don’t know why. He just added to the drama and made the chaos look more official.

Oscars’ Lesson 4: I hope I can apologize quick and often when I’ve made a mistake. I pray I do it with the swiftness PWC exhibited. I hope.

Ok. Let me take a breath for this next one.

Her post-award show interview gave me an unpleasant view of who she might be as a person. While explaining what happened, she threw- NO, FLUNG -Beatty under the proverbial bus!  Did you notice it?

She said something like “I don’t mean to start stuff – but whatever story that was, I had the card with me.”  Her implication was clear: Beatty was full of it.  I guess it never dawned on her there would be more than one envelope in a process managed by a multi-million (if not billion) dollar company. She should apologize to Beatty for implying he was lying. She did want to start stuff!

By the way, pictures confirmed he was indeed holding the envelope he said he was holding. Mean girl. Sometimes, it’s better to say less rather than more.

Oscars’ Lesson 5: I also don’t want to throw anyone under the bus or try to stir the pot. Peacemaker, that’s who I want to be. Yeah.

Truthfully,  I’ll remember this Oscars show for more reasons than the drama and fashion.  They actually taught me something!