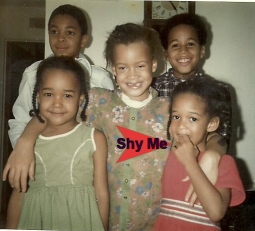 I’m still amazed by how God has changed me. See, I grew up pretty shy and withdrawn. I was endlessly tormented with the fear of what people thought of me; I feared whether or not they would like or accept me. The result was being super inhibited and rarely sharing my views or opinions even when they were burning inside. I figured then people would like me for sure. I often thought to myself “CHANGE ME LORD!” – Intentionally with no comma –

My “Change me Lord” prayer was answered!

I hated being shy and withdrawn. It made the world seem like it was passing me by incrementally.

For years, God worked on me; little by little challenged me; called me to do “hard” things to transition my dependence from people and toward Him.

He showed me time and time again that I was of little use to Him (or anyone else for that matter) if I could not muster the courage to share my faith, my testimony, and yes…at times, my opinions.

Girl, I was “that” coworker.

For instance, at work, I would sit quietly in meetings. Scared to speak, I said just enough as to not upset the apple cart. What a shame. Back then, I had no clue I was a creative and smart woman. If I even had an inkling, I hid it behind my need to please.

I think a lot of Christian women do that. Do you agree?

Anyway, it has been a long, difficult journey toward the liberty I now enjoy in Jesus.

I have a long way to go, but one thing I am rarely accused of these days is being timid.

Girl, I praise God wholeheartedly because deliverance was expensive.

Freedom was the result of loss…lots of it.

It cost me everything to gain courage and grit. It was like God had to “empty” me to re-fill me if that makes sense. But, it was well worth it. I wouldn’t trade a bit of it.

The Lord changed me by removing me from every comfort zone I cherished.

It made me have to fight. It made me a survivor. He delivered me from all my fears by helping me expand, experiment, fail, and persevere.

Once set free, next you bring Him glory with your life!

He put me “out there.” I found myself on television screens, radios, and even interviewed on the CNN website. It’s wild what He can do if we let Him.

Through His deliverance and healing, I’ve been able to speak to hundreds of people at a time without giving a “Sam Hill” whether they “like” me or not. The important thing was that they heard me and received from me whatever it was they were supposed to receive.

God really worked in me to boldly declare His greatness regardless of people’s faces or opinions.

Jeremiah 1:18 New International Version (NIV)
18 Today I have made you a fortified city, an iron pillar and a bronze wall to stand against the whole land—against the kings of Judah, its officials, its priests and the people of the land.

He made me strong. Bold and dauntless.

Yeah. I went through so much loss before I learned to be bold.

The struggles taught me to die to parts of myself – the weak parts.

As I succumbed to God’s plan for my life, He made me a “bronze wall” – a woman of strength and courage.

I have a long, long, long way to go to be who He has called me to be; but do know I’m committed to fighting my flesh and I will continually stay on the alter – as the old people used to say.

Do you remember that hymn?

Have you ever thought about the story Isaac and his father Abraham in the context of the Lord changing you?

Long story short, the two of them hiked up a mountain to surrender a sacrifice.

You may remember Isaac was a blessing given to Abraham in his old age.

Well, Abraham was old when Isaac was born, so when the story took place, he was even older. Point: an old man is not usually as strong as a young man, right?

At any rate, on that mountain, Abraham (an old man) had to bind Isaac (the young man) and then lay him on the altar to BECOME the sacrifice.

Have you ever thought about that? Isaac had to have a clue what was going down at some point.

Nowhere in scripture does it say that Isaac struggled with being tied up.

He likely could have “taken” His dad. After all, Isaac was young and strong while his father was old and weak. He could have broken loose, right?

He didn’t struggle because of his surrendered, trusting heart. He was yielded to his father’s command, desires, and direction in spite of what it could have meant for him.

We never want to stay on the altar…

We “break loose” all the time. We struggle with our Father as He attempts to do His work in our lives.

While he’s trying to keep us on the alter [surrendered], we repeatedly disobey, rebel, and maybe even “wiggle” off the altar before the work is done.

He can’t make us strong or make us what He designed us to become because we will not submit.

I don’t know about you, but today I determined to stay on the altar and allow God to complete His perfect (mature/finished) work in me. Will you?

6 thoughts on “Change me Lord”