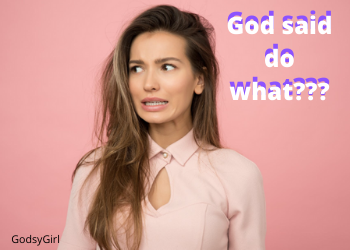 What if God asks you to do something that makes absolutely no sense in your mind? Has it ever happened to you? It’s happened to me more times than I can count! Yep, God often tells us to do things that are totally odd and a little cray-cray… to us anyway.

He’s told me to give someone a hundred dollars…when I wanted to keep that loot for myself.

He’s told me to go places I was scared (or didn’t want) to go.

He’s told me to bless people with gifts …Girl, folks I didn’t even like.

He’s made me walk over to complete strangers and say things that seem crazy to me.

He’s told me to say things to my husband about ministry that was totally out of my lane.

He’s made me apologize when I was not wrong. *all the married people say hallelujah*

He’s made me do ministries I didn’t want to do nor knew anything about.

He’s made me create a YouTube channel. Ugh! (Had to get rid of it because of a creepy man.)

Do you see the theme in my comments?

What words are bolded above? It’s the “ME” and the “I” words. Pronouns, right?

Anyway and the “F-Bomb”

In the final analysis, I’ve discovered our biggest barrier to obedience to God is US…ourselves! I’ll talk more about that later, my beautiful Christian sister.

To obey, you gotta have the”F” Word – “FAITH.” God calls us to do hard things for lots of reasons, we’ve gotta learn to trust Him.

(Not the “f” bomb you were expecting huh?)

Our purpose on earth is not self-satisfaction...it never was.

But, the end result in this Christian walk is always the same: to bring glory to Him and to multiply His kingdom on earth.

Then, what happens is people will see God do impossible things through us.

Guess what happens next. That brings glory to the Lord, it builds – or even cultivates – faith too! Win-Win!

Note: the “f” bomb, I was sarcastically referencing was the word “faith.” I didn’t want to leave that to chance for those who may not have understood my quirky humor.”

Christian Woman, your obedience is like a giant spotlight pointing toward heaven that says:

“Hey, goofballs…GOD IS REAL AND HE IS STILL INVOLVED IN THE LIVES OF MEN! Don’t believe me…LOOK AT HER!!!!”

This is why we must obey God no matter what – because of that spotlight.

Seasoned Christians often forget this because of the intimacy He allows.

We get too familiar because He’s so present in our lives. Yet, never forget, the fellowship and the friendship can never negate the fact HE IS GOD.

He is in charge. We are not. Clear, right?

Yep, He is the God of the universe…the Creator of all things. We have no right to question or challenge Him ever. Again, our job is to just obey.

Puh-lease. You can’t understand such a God, don’t even try!

Don’t be a proud, arrogant Christian.

Disobedience carries a weight of arrogance, don’t you think? When we don’t obey, it’s like we are saying we know better than He does.

We cannot even begin to understand Him or how He is working. That’s why we need to trust Him and just submit! Relent. Give in.

Never waste your time trying to figure Him out.

His ways are too advanced. Just obey.

(Yeah, I’m being redundant on purpose…and I’m also talking to myself at the same time!)

You know the scripture I’m going to reference, right?

8 “For my thoughts are not your thoughts,
neither are your ways my ways,”
declares the Lord.

I love the way Eugene Peterson conveys it:

Again, why even try to understand God’s movements, right?

It’s so fruitless and stupid. But, we do it time and time again. I know I often try to figure Him out myself.

Duh…what dopes we are, Girl? We can’t explain how a brown cow eats green grass, yet produces white milk and we try to figure out God? *hehe*

God is so patient with us; why do we test Him?

Sometimes, in His grace, the Lord reveals glimpses into His plan for us. I like it when that happens because things begin to make some sort of sense to me. It makes it easy to obey.

Other times, not so much. Those are the most difficult times – those times when He leaves me completely in the dark.

But in the end…my job is not to try to figure Him out- as I’ve stated earlier.

Again, it’s to obey – to do exactly what He said WHEN HE SAYS TO DO IT!

I am being honest.

If you are honest too, you can relate to what I’m saying.

If you want to pretend you’re perfect, find another blog …after you are finished walking on water. 🙂 You ain’t perfect, Girl! Still, I love you anyway. <3

Really. Obedience is a common struggle for most Christians. We find ways to justify it, but it’s a struggle all the same.

Back in the day, I used to say I was waiting for confirmation from the Lord before acting on what He told me to do. Or sometimes, I’d say “I’m praying about” this or that. The truth of the matter, I was usually just scared to act.

Get outta here with that weak faith, Christian woman!

Have you ever done that too – “sit” on what God tells you to do? Biding your time? I surely have.

I am now much better at acting in faith than I used to be but make no mistake about it, I still have a long way to go. It’s ok because we are all a work in progress.

Undoubtedly, I’ve been too frightened to act on what God has told me to do – plenty of times in fact. I probably will again. I’m a human.

So, I’ve been known to justify my fear with more “Christian” talk – like “I’m not sure this is the season to do that” or “once I have confirmation, I’ll move forward”or some other garbage.

Want to hear something hilarious?

I knew that the whole “fleece” thing of having God “prove” Himself was just a sign of fear and weak faith. Yet, I did it anyway. I mean I did it OFTEN!

Such a sad testament. Why should He need to accommodate me? Or you, for that matter?

Hey, I have a 12-year-old son. Girl…a pre-adolescent in my house! Isn’t he cute up above?

He is still cute now, but he’s surely growing up.

When I tell you, he’s every bit a pre-teen, he so is!  This fella is beginning to question, inquire, and think on his own. It’s driving me absolutely wild!

Research actually asserts this is a good thing though.

They say young people who are developing properly gain a sense of independence that prompts them to question authority and test boundaries. When they challenge authority, it’s actually a sign of growth and development (HOWEVER, they have to be respectful though…at least in my house they do.)

The absolute opposite is true for us in the Kingdom of God.

While this may be true in youth development, our measure of maturity is very different with the Lord. We demonstrate spiritual maturity when we do NOT test God’s boundaries or question His authority.

Back to my boy.

My child can be such a dooty-head in his pre-teen life!

Here’s how my day often plays out with him:

With a blank stare, he usually looks at me like I’ve completely inconvenienced his all-important 12-year-old ‘no job having’ day.

Then, he reluctantly arises and commences as though his feet are filled with sand or concrete.

That’s not the worst part!

Occasionally, after I tell him to do something, he will just wait; continue watching his show or reading his book.

This angers me most as a mom! When I tell that little knucklehead to do something, I expect him to do it COMPLETELY AND SPEEDILY!

I don’t care if he understands why I’m asking.  I don’t even care if he’s scared to do it! His job is to obey. Simple as that.

Do you see where I’m headed?

Do you see the parallel of obeying God when He tells you to do something you don’t want to do?

He doesn’t need you to understand!

He just needs you to act and to do so swiftly …just like I need my pre-teen to act.

Listen. I don’t care how old you are; you are His precious baby girl. He loves you so much. Nothing will change that ever. Your disobedience won’t make Him love you less.

Still, He expects you to do what He says when He says it. God forbid we should ever question Him or “sit on” His directive like my kiddo has been known to do from time to time.

Why do that to our wonderfully loving Father? I know I don’t want to. Do you?

When God tells you to do something you don’t want to do.

Question: You do what??

Answer: You do it anyway and FAST!

You understand why I think obeying God is so critical, right?

Yaay! You get it!

When God asks us to do something really hard, it’s easier to just do it QUICKLY! The longer you wait, the harder it becomes. Trust me.

To be clear, I value Christian counsel and prayer.  Don’t get me wrong; I really do.

But, don’t use either as an excuse to delay your obedience.

Pride (i.e. to focus on our own image, needs, wants, or “personal agenda”) is a major inhibitor to our obedience to the Holy Spirit.

Disobedience carries such arrogance. How? Because it indicates we think we know better than God or we worry how we will look if we obey. Either way, it’s pride. Either way, we are focusing on ourselves.

Remember…its up to God to make it all work out in the end!

When God asks you to do something totally “out of the box”, here’s what you should remember: He is ultimately responsible for the success of it – not you.

You may not see how it will work, but that’s not your job.

When God tells you to do something – please, do it.

When the Lord tells you to do something…

Don’t attempt to figure God out.

Don’t be concerned how you look; just obey.

Did you relate to any of this or am I talking just to myself?

Got a Bully? Don't worry, you've got Jesus too! – GodsyGirl Inspiration for Christian Women and Pastors Wives

Dealing with bullies can be a challenge.  Sometimes people purposely target Christians because they think we are easy targets. I say WE ARE NOT!  Listen to this podcast about how Christians handle bullies and get a fresh perspective on your power, your purpose, and the God who is always fighting for you.    Check out the GodsyGirl blog post "How to handle a bully as a Christian": https://godsygirl.com/how-to-hanld-e-bully-at-work-bully-boss/ Don't forget to visit the GodsyGirl Shop!