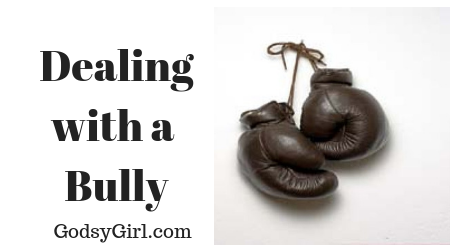 Handling Bullies as a Christian Woman is a tricky situation. If there is one thing I cannot stand it is a bully! Just because I’m a Christian doesn’t mean I’ll wimp out when cornered. Jesus didn’t and neither will I.

It’s important to note and remember: the weapons we fight with are not the ones used in this world.

The scripture to remember when dealing with a bully is:

2 Corinthians 10:4: “The weapons we fight with are not the weapons of the world. On the contrary, they have divine power to demolish strongholds.”

The enemy loves nothing more than to try to get us to “fight” as the world fights.

He pushes and pushes and likes to huff, puff, and threaten to blow your house down! But as Christian women, we have to do our level best to keep a cool head, embrace righteous indignation while still walking in the love of Christ.

It ain’t easy! Trust me; I know how difficult that is. That’s why I wrote this on how to handle a Christian bully!

People can take you “there”. Nevertheless, Christianity is all about trusting God to fight your battles while allowing the Holy Spirit to order your steps along the way.

Other times, it’s none of that. They just have a power advantage in the workplace or [dare I say it] in ministry. They go on power trips and drag everyone else with them. That so blows, doesn’t it?

Think about Goliath in 1 Samuel 17. Notice in verse 8, the scripture says he “stood and shouted” at the people. That’s what they do. They make noise!

It wasn’t so bad Goliath was talking “loud and drawing a crowd” as it was what he was saying. My mom calls what he did in verses 8 and 9 “issuing woof tickets” or talking “smack”.

That’s when the people of God jumped up and took him down, right? Nope! It should have ended that way, but it didn’t.

Don’t be a scared Christian!

The Bible says after “hearing the Philistine’s words, Saul and all the Israelites were dismayed and terrified.” They fell for it. The noise and theatrics scared them to pieces.

I think flesh-covered bullies are more bark than bite. They just want to scare us.  They want us to run away with our tail between our legs defeated and beaten without even trying to fight!

My tip on how to handle a Christian bully:

As a Christian woman dealing with a bully, ask yourself “what can she/he really do to me, anyway?”

Don’t be afraid of fear either…

Christian Sister, we all get scared. I know I do and I can certainly relate falling for a bullies’ menaces. Can’t you?

Fear in itself can be paralyzing, but only if you let it take root. I think it’s best to quickly acknowledge the fear and do what you need to do to get rid of it.

What I do when I’m afraid…

I like to run to the scripture to soothe my fear. My girlfriend pops in worship music. That helps her.

What do you do when you’re afraid? Jesus tells us time and time again that we don’t have to fear the bullies of the kingdom of darkness. We just need a strategy.

Jesus is our mighty Vindicator and will fight our battles and cause us to triumph. This truth caused David to inquire (likely just as loud as Goliath was screaming) “who is this uncircumcised Philistine that he should defy the armies of the living God?”

Confidence in Jesus gives you the confidence to fight the bully – any bully in any form.

Try not to be frightened, and make sure you fight with the right weaponry and armor.

By the way, you know how the story ended with David. David grabbed a rock and a sling and handled that joker – once and for all! He knew how to handle a Christian bully! Well. Wait. Goliath wasn’t a Christian.

Oh well, you get my point!

Here’s one of my favorite parts of the whole encounter!

I love how David refused the weapons the folks handed to him. What they tried to give him was the traditional armor of warriors. He didn’t care for them because they didn’t fit. Those weapons were not for him.

Reject the world’s way of fighting.

Likewise, Christian Sister, you refuse the “world’s” weapons too! They aren’t for you!

People will want you to curse, yell or “tell a bully off”. But, that’s not our way of handling things? That’s not our armor or weapon. It won’t fit, it won’t work. Fight the flesh-covered bully with God’s tactics.

Do you see the parallel, Christian woman?

Instead of even trying to fight with the world’s weapons, turn to what you know is tried and true – God’s Word.

With that said, here are your spiritual weapons…

the breastplate of righteousness and the gospel of peace.

Don’t forget the shield of faith, the helmet of salvation, and the sword of the Spirit.

Finally without prayer, you’re lost! You absolutely must pray.

Pray for your flesh-covered bully. Pray for wisdom on how to handle them. Speak only blessings on them. That’s what Christians do. We bless those who persecute us.

Don’t flinch when the enemy jumps at you, Christian Woman…

So, when the enemy flexes his muscles on you, put on the full armor of God, so you can stand against his stupid tricks and schemes.

Don’t stand “terrified”. Stand firm, bold, and watch the salvation of your God. Instead of being paralyzed by fear, determine in your heart to love your flesh-covered enemy; act justly, and reflect Christ in EVERY interaction with them.

I know it’s hard, but I’m talking to myself too. I’m also sharing what has definitely worked for me throughout the years.

NO! Don’t be a chump, Christian Sister!

And whatever you do, don’t buckle or become intimidated!

Again, you are God’s girl and He will deliver you from any strong enemy!

He will give you the ability to love and really forgive that bully while speaking and doing what is right in His sight.

So, take your spiritual “rocks” in your hand and get ready to rumble in the spirit! Note: I said “spiritual rocks.” Don’t go hitting anyone upside the head with a brick and say I told you to do it. *hehehe*

Try not to take the bully too personally. Remember, some people hurt folks because they are so inwardly bruised and have been wounded by others. The result is continuing the cycle of pain.

Pray for them, but don’t become their victim. It’s OK to set boundaries.

Final scripture for dealing with a bully:

For we are not fighting against flesh-and-blood enemies,
but against evil rulers and authorities of the unseen world,
against mighty powers in this dark world, and against evil
spirits in the heavenly places.
Eph 6:12